Some of the best wines in Virginia come from MountainRose 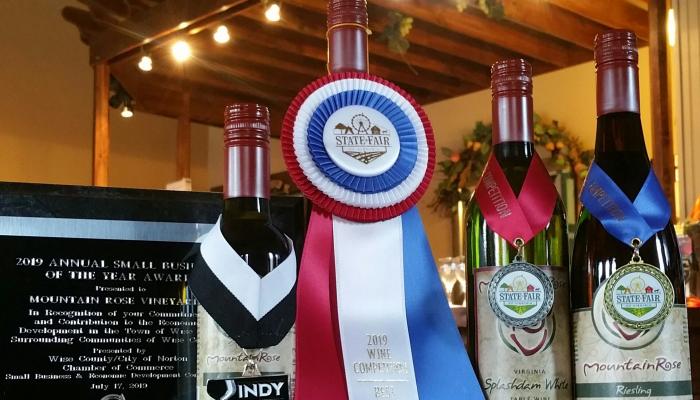 MountainRose Vineyards is thankful for a very good year!

In May, the winery’s most award-winning wine, Autumn Gold, received a Silver medal in the 2019 Indy International competition.  Splashdam White was awarded a Silver medal in June at the Virginia State Fair Wine Competition along with Riesling, which received Gold.  MountainRose was pleasantly surprised in July by the Wise County Chamber of Commerce with the 2019 Small Business of the Year award.

On September 26th, Eric and Opie were honored to represent the Lawson family, attending the Black Tie and Boots Gala in Richmond. That evening the winery’s Gold medal winning Riesling went on to receive the 2019 ‘Best in Show’ for white wines, against a strong field of fellow Virginia winemakers.

In October, reporting their best harvest in efficiency and production, the vineyard brought in nearly thirty tons of grapes in just under four weeks. These results seemed fitting since the year began with the introduction of ‘Persephone’, a sparkling Concord wine variety named for the daughter of Demeter-Goddess of the Harvest!

David and Suzanne are ever thankful to all the family, friends, crew, volunteers and especially their growing fan base of loyal customers who have truly made MountainRose Vineyards a success! Best Wishes for the Holiday Season and the New Year! Cheers!